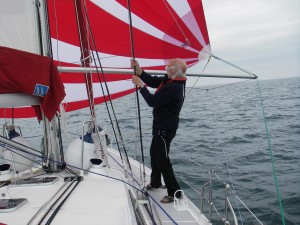 We left Langstone Harbour on Friday morning for the sail round Selsey Bill and into Littlehampton.  From Selsey Bill onwards it was a dead run and we deployed the spinnaker for the first time, and it set well.

We have wanted to visit Littlehampton for some while, but this was the first time in.  Awaiting us was the lady harbourmaster and our friends Moine & Ian, who joined us for drinks on board before supper at the excellent Harbour Lights restaurant.

On Saturday we stayed put during strong winds, and then on Sunday morning set off eastwards.  At first there was drizzle and the wind was weak and difficult, but eventually the weather cleared and a westerly wind sprang up and we had an excellent sail eastwards along the south coast,  We rounded first Beechy Head and then Dungeness Point.  We fell short of Dover and put into Folkestone late in the evening.  This is a drying harbour, so we took to the ground during the night.  By morning a strong easterly had developed, to which the harbour is exposed, so we had a rather bumpy float-off and set forth to battle our way to Dover where there is good shelter within the marina.   Here we have been catching up on sleep.

The next objective is to cross to Dunkirque, which we must do South East at right-angles to the very busy shipping lanes.  A south easterly wind is forecast, which means we could not sail this, so are waiting for workable winds, as so many historical figures have done here in the past, pending their crossings to or fro from France, which is clearly visible across the channel.

with love to all