On Thursday 2nd May we moved on-board for the summer.  The car was absolutely full to bursting, with stores puzzled into every nook and cranny.  It was lovely sunny gentle weather at last and we spent 2½ days fitting everything in and completing various jobs.  We now have a cabin clock and barometer, coat hooks in the cabins and towel rails in the heads.  The equipment we will need when laying up in the autumn has been packed away in voids under the bunks.
On Sunday 5th May we left Ridge Wharf at 07:00 in a beautiful morning, if light airs.  Once out of the river we hoisted sail and, aided by the ebb tide, crept down harbour (two hours) and out to sea.  The first stretch across Studland Bay was a broad reach and we soon had the cruising ‘chute up, which gave us a better speed.  Then we were close-hauled around Anvil Point and St. Alban’s Head and sailed into Mupe Cove, where we were anchored in time for lunch and an afternoon doze in the sun – our first serious relaxing of the season.  Mupe Cove is a tiny anchorage at the western end of Worbarrow Bay.  The whole area is often unavailable as it is within the Lulworth military firing ranges; but on Bank Holiday weekends and during August it is given back to the public.  Although having such a vast and beautiful part of the Dorset coast usually closed is regrettable, it does have the advantage that it is free of developments and mostly unspoilt – a real treat for those who know. 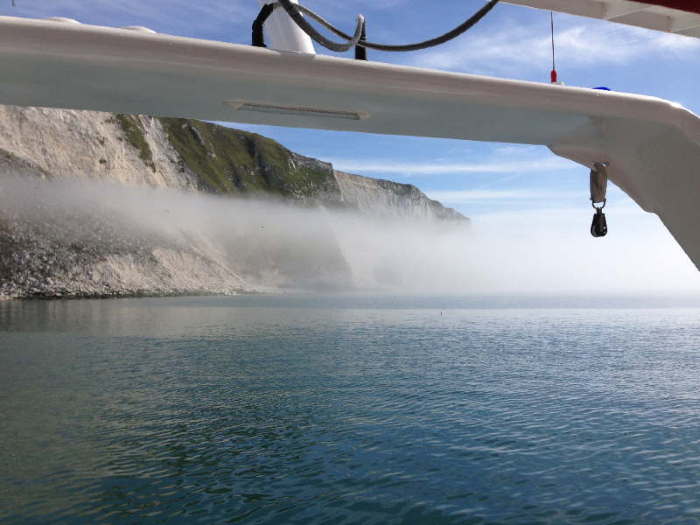 On Monday we awoke to calm and mists.  We waited for the breeze and then set out for Dartmouth hoping things would improve.  But the breeze faded and we drifted around in the mist for an hour or two before groping our way into Weymouth – an exercise which gave is our first serious use of the radar.  It was nice to see Weymouth again and we were moored next to an Ovni 435, which has recently been purchased in Greece by David and Annie, who, with John, were bringing it back to Teignmouth.

The weather is about to close in, but Tuesday gave us a lovely window with sun and south easterlies, so we headed down Portland Bill and rounded the tip close inshore clear of the dreaded overfalls and set out across Lyme Bay. It turned out to be a glorious spinnaker run, with average speeds well over 6.5 knots.  We did so well that we went past Dartmouth and on to Salcombe, although the wind failed in the evening for a while. In Salcombe we have taken a mooring in the sheltered ‘Bag’ area to sit out the impending gales.  It looks like we will not be wanting to move before Sunday, so some more relaxing, reading and a few trips ashore by water taxi.
love to all
Ynskje & T
By Ynskje & Tony | May 8, 2013 | British Isles | 3 Comments |