Since Lucas and Theo departed, we have been to and fro between the boat and home, doing various work in preparation for the off.  The weather has been fantastic, and we have really enjoyed being on the boat, watching the bird life and sitting out in the cockpit watching the sunsets develop.

We now have a domestic radio and hifi system with speakers fitted in the cabin, so we can listen to the radio and also play music from the iPhone via BlueTooth.

We took the boat to Salterns Marina in Poole Harbour for an engine service by the Volvo-Penta agents – necessary to gain a second year’s warranty. 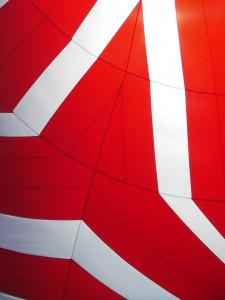 On Tuesday we sailed to Poole Town Quay to meet with Jack from Ullman Sails, who brought our new cruising ‘chute on board and who came out into Poole Bay to show us how to use it.

The wind was rather light, but we did get to set the sail and practice gybing it.  It can also be set as a spinnaker for running further off the wind.  It will help a lot under certain conditions.

After we returned Jack to Poole Town we sat alongside in the sun, enjoyed being in town and had ice-cream.  Eventually, a very large swarm of bikers descended on the quay, complete with rock music, so we fled for the quiet of our mooring.

On Wednesday afternoon we were lifted out of the water at Ridge Wharf so Tony could tackle the horrid noises coming from the  stern gear.   This involved removing the Rope Stripper, propellor and the cutlass bearing, which supports the stern shaft as it emerges from the stern tube.  Once the cutlass bearing had been replaced, the whole was re-assembled before dark.  On the Thursday morning we were re-launched and had a test motor out of the river.  The stern gear is now much quieter, except at 1000rpm, where it is still rather noisy.

We had been planning to set off for Littlehampton early on Friday, but the forecast was for an end to the westerly winds and foggy easterlies on Friday, so we decided to make a start on Thursday even though it was 12:30 – much later in the day than we would choose.  We took advantage of our shallow draft to pass down river close to low tide with mud as far as the eye could see.  We set just the genoa and whistled out of the harbour.  We had an extraordinarily fast passage to the Solent, even with just the genoa set – a combination of the westerly force 5, the tide and our new feathering propellor.  We passed all the way through the Solent, repeatedly revising our objective.  Eventually, just seven hours after leaving Ridge Wharf, we put in to Langston Harbour, east of Portsmouth and entered Southsea Marina – not very far from home.  This marina boasts an excellent Indian resteraunt, so we had a welcome curry.  Today, Friday, Sarah G will come for morning coffee, bringing post and some items from home we forgot.  We then head out around midday before the marina tidal cill closes.

That’s the news for now.

One thought on “All fitted out and ready to go… and gone!”