We are at last afloat and ready for the 2013 season.  With the very late and cold spring we have been a month later than usual.  Even so, it seemed tough to turn out at the beginning of April and take the cover off Antipole.  But we gradually got the various tasks done.  In addition to routine ones, we had some repairs and improvements to make, including re-building the steaming light, which was carried away when we were hove to in the Netherlands; various remedies to paint work; installation of a USB charging socket at the wheel station to keep the iPad topped up and two extra reading lights in the saloon.

We also discovered that water had been leaking through a faulty weld in the bottom of the anchor locker and collecting in the bow void – there was gallons of it.  The Ridge Wharf Yard was commissioned by Alubat to sort that one out, and the hole is now plugged and everything made good. 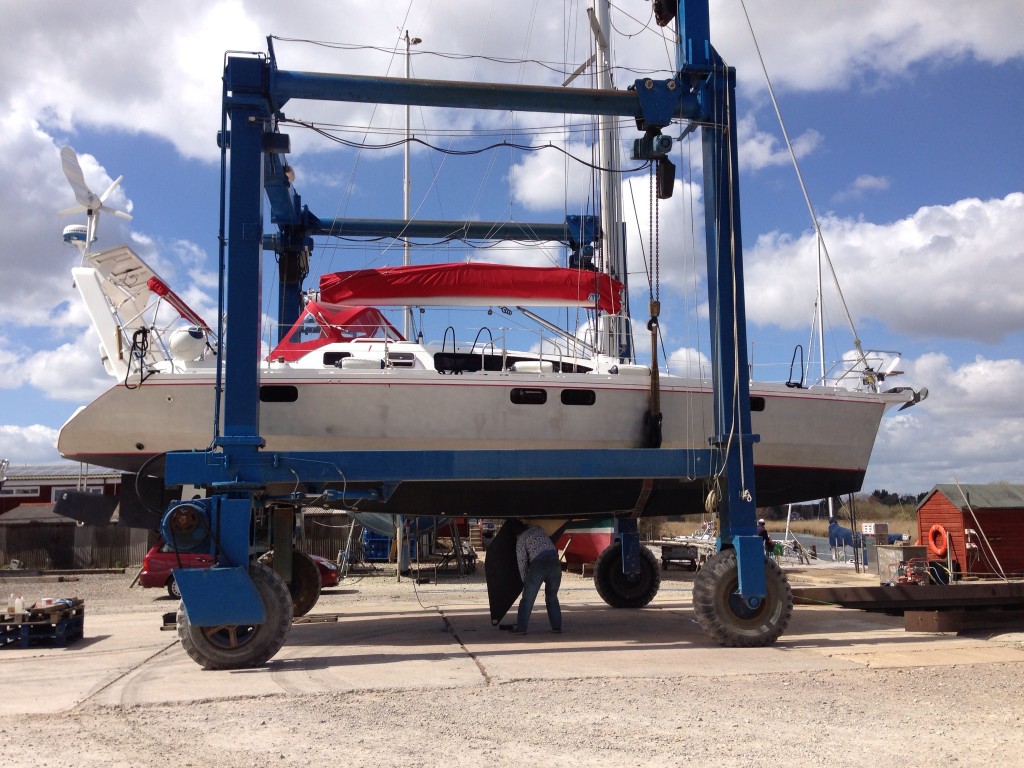 The weather finally turned better in time for the launch on Friday 19th April.
Antipole was left high in the slings over lunch time so Tony could inspect the plate mechanism and apply antifoul paint where it is not normally accessible.

It was good to be afloat again – somehow the boat becomes alive again after being a dead weight.  We have spent several days completing the re-installation of all the gear removed for the winter and rigging the sails.  She has also been cleaned and polished and is looking very smart.

On Saturday we sailed (and motored as the wind has finally eased)  to an anchorage off Round Island in Poole Harbour, by way of a test sail.  It is a beautiful spot and on Sunday morning a curious seal hung around and followed us.

Now we are back home making final preparations for our departure around 4th May.  We plan to cruise around the British Isles over two seasons. This first one should take us around Cornwall and, via South Wales, to Ireland, which we plan to work our way around clock-wise, before crossing back to Aberdyfi in Wales and thence up the North Wales coast and to the Isle of Man.  We plan to then pause over winter somewhere in Cumbria before recommencing in 2014, when we will explore Scotland and return via the east coasts.  This plan enables us to cover both the west coasts of Ireland and Scotland in the early summer months, when the weather should be at its easiest.

This will be the first time we have over-wintered away and we have had to forward plan to have on-board the various supplies and equipment we would normally have fetched from home for laying up.

Details of our plans can be found in the Cruise Plans tab above, including when we expect to be where.  As ever, family and friends are welcome to join us, so have a look and see if you can make it!

More news once we are on our way.  Love to all…