The Saimaa Canal and Russian Waters

Our passage through the Saimaa canal was mostly smooth. Apart from one, each of the locks was ready and waiting for us and as soon as we were in, the gate behind closed and we were dropped to the next level.  Pailli lock is also the site of Russian boarder control and we had to wait for two big ships to pass.  The inspection of the ship before us took an hour and then it was our turn.  It took an hour to scrutinise our passports and inspect Antipole, which included photographing the contents of every locker and nook and cranny under every floor board.  After 3½ hours we were through!  We spent the night just before the last lock, so the next morning we passed out of the canal to the Russian customs inspection.  As we were not stopping in Russia, this was relatively straight forward.

Clear of the canal we hoisted sail and had a gentle sail down past Vyborg before picking up a good wind for our run westwards.  It was an excellent fast passage and we crossed the border back into Finland after just 7½ hours.  ¾nm over the border we put into the island of Santio where we had arranged for border and customs inspections as we re-entered the EU and Schengen area, which took 15 minutes.  However, Santio is within the border exclusion zone and, as it was only late afternoon, we were required to move on.  The wind faded as the evening came.  We were unable to anchor anywhere, the whole area being smooth rock or bolder, so we had to motor 1½ hours to Tammio.

Tammio is a small island with what has been described as the last unspoilt fishing village in the Gulf of Finland.  It comprises smooth rock which makes for good slipways in the harbour, which are dotted with fishermen’s huts perched on boulders.

These days, after over-fishing and Soviet-era pollution, there are scarcely any fish left in the Baltic and few sea birds.  The island habitation is now mainly summer cottages.  It is, however, gorgeous and we enjoyed walking along the streets which are either smooth rock or grass.  The tree blossom, mainly viburnum, scented the air almost everywhere.  There is no electricity, apart from solar panels, and no vehicles.  Goods seem to be moved by wheel barrow.  It was very quiet this early in the season and the one shop was not yet open. 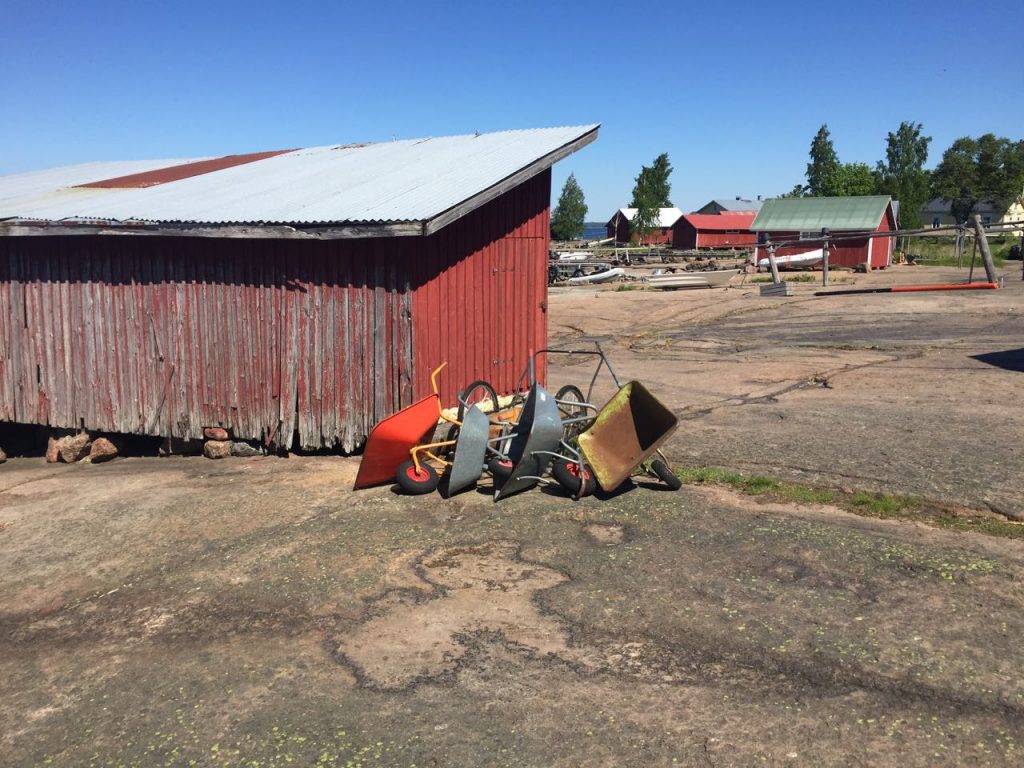 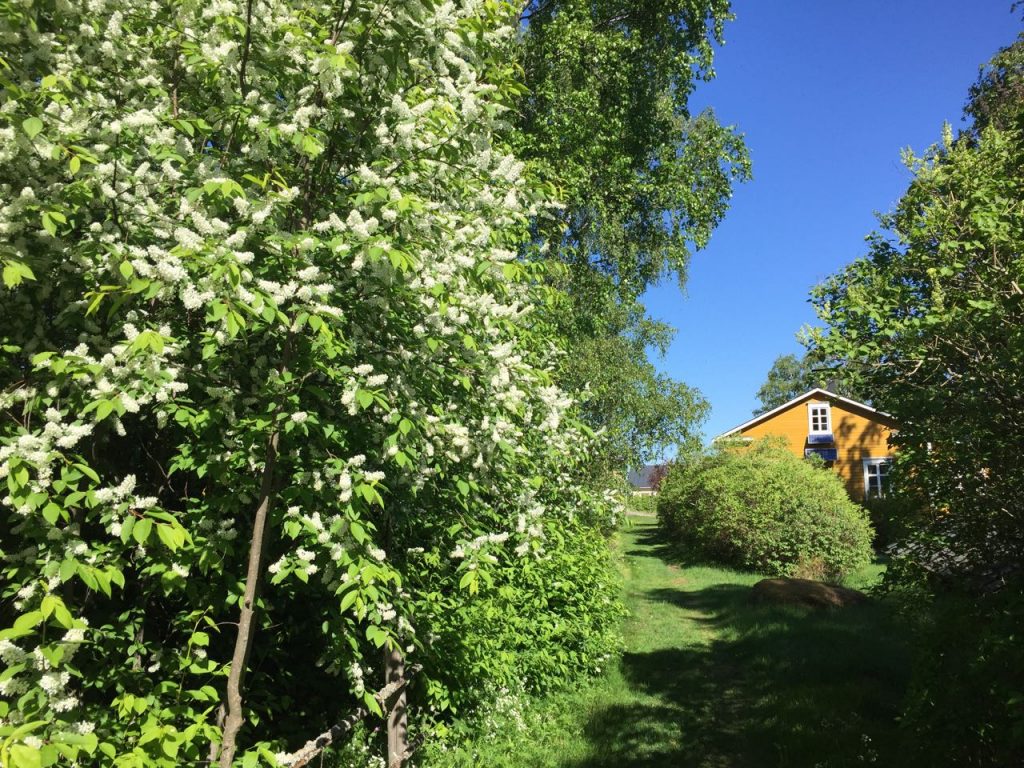 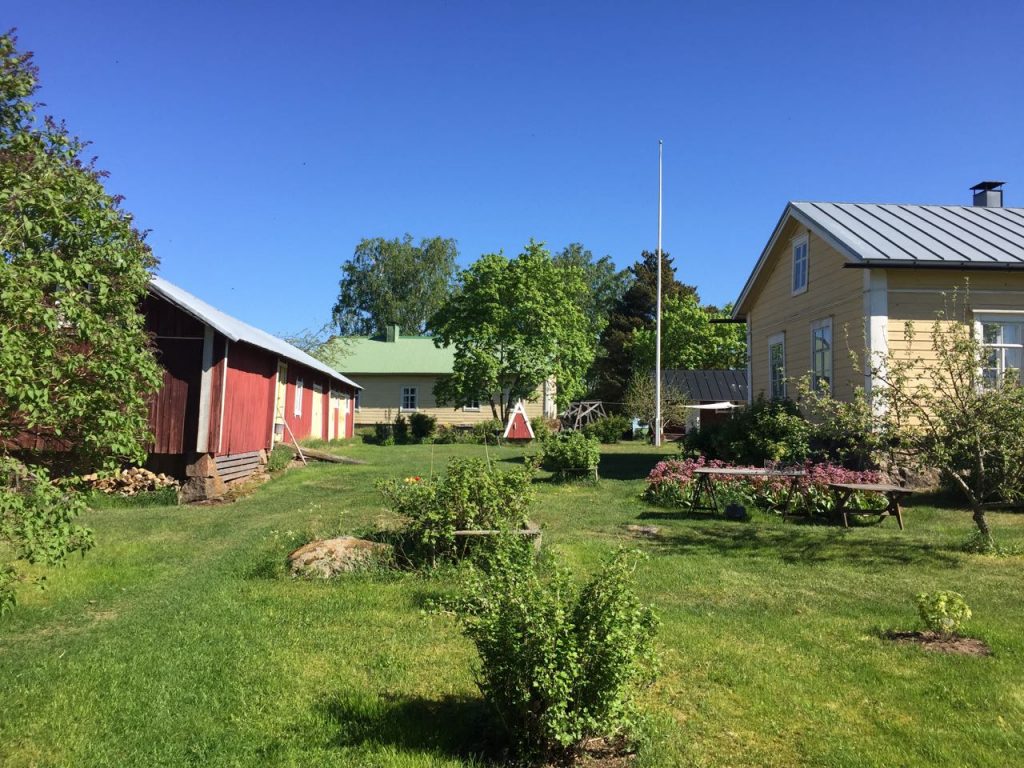 From Tammio we had a lovely 13nm sail to Hamina on the mainland.  Hamina is a military town laid out in the form of a hexagonal wheel with radial streets centred on the town hall.  Of more interest to us is the pleasant harbour wharf in the river where we berthed.

Opposite standing on its own island is the Hamina Yacht Club, dating from 1882.  A little ferry boat shuttles to and fro from next to our berth.  This evening, we took the ferry to visit the club in its magnificent pavilion overlooking the club pontoon moorings.  We enjoyed a lovely meal there.

On Sunday we will make the most of one day of northerly wind to sail out of here and head for Kotka.

One thought on “Through the Saimaa Canal to Tammio and Hamina”