We left Kirkcudbright early on Tuesday, taking the ebb down the River Dee. We had a good SW 4-5 for our passage to the Mull of Galloway, so it look a few tacks to clear Burrow Head before we had a straight sail across Luce Bay. We passed close to two rocks known as the Scares – Big Scare and Little Scare – names that seem appropriate before the days of good charts and GPS. We arrived at the Mull of Galloway around 2pm and found overnight shelter under the east side of the headland.

Thus we were ready to tackle the mull itself at slack water early on the Wednesday morning, but strong winds forecast to F7 led us to wait another 24 hours on the anchorage. The next day we had an easy passage round the mull and up the coast of the peninsular. We had a good run with the cruising ‘chute set. As the wind lightened we put into the harbour of Portpatrick. 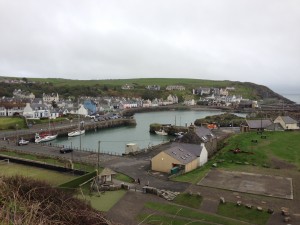 Portpatrick was for hundreds of years the main crossing point to northern Ireland, as it is just twenty miles distant at this point and often visible to the eye. Portpatrick must have been prosperous in those days as passengers waited for a ship and a favourable wind. The harbour is tiny and the entrance narrow and difficult in the prevailing westerly winds when strong. It was unable to cope with larger ferries and lost out to Stranraer round in the shelter of Loch Ryan, as Stranraer has now lost to Cairnryan. So Portpatrick is now a sleepy backwater with lots of hotels and a bowling green where the railway station once stood. We waited an extra day while it blew as Ynskje is presently recovering from Tony’s cold and enjoyed a surprisingly good evening in a restaurant overlooking the harbour. 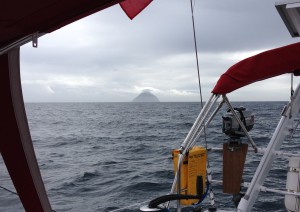 Ailsa Craig with a cloud hat

We set off early for the passage northwards and into the massive Firth of Clyde.  We had three excellent spinnaker runs, although we were becalmed for a couple of hours during rain.  We spent much of the day marking our progress past Ailsa Craig – the massive rock in the entrance to the Firth.  It rises 1100’ (340m) and is often topped by cloud hats (see photo).  It is home to many sea birds, especially gannets and we saw several squadrons of these very graceful birds in line astern skimming low over the water.

We eventually came to the Isle of Arran, of which more in the next posting.
love to all…

[Note for non-Scottish readers: a firth is a large inlet of water between land masses – similar to a fjord but not necessarily formed glacially.]