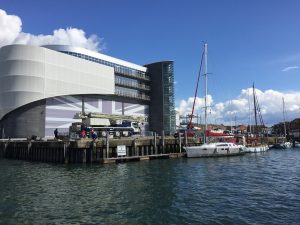 In Portsmouth we were moored on the Portsmouth Sailing Club pontoon in the Camber dock, which is now right next to the Ben Ainslie Racing facility for the UK America’s Cup challenge, so we had an excellent view of the foiling catamaran being rigged and launched.  During the two weeks we were there we loaded stores for the trip, especially goodies we might not be able to get while the boat is away in foreign parts for two years or so – especially good tea, chutneys and marmalade.  It was very convenient being within a short distance of home and Tony was able to complete various maintenance tasks as well.

On Sunday 1st May Ynskje’s son Dan joined us for the long outward passages and we sailed in the evening with good westerly winds forecast.  By Monday afternoon we were off Dover and still going well but Tony had suffered badly from beginning-of-season sea sickness over night, was cold and not confident about managing a further night and day at sea. We decided to put into Ramsgate for rest and sleep. 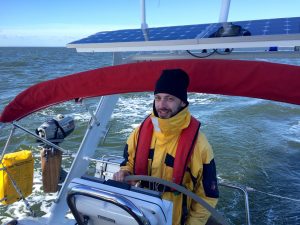 On the Tuesday morning we were much revived and set forth again with sunny weather although weaker and less reliable winds.  It was a much more enjoyable trip, especially for Tony who was rapidly gaining his sea legs.  Dan enjoyed being away from the stresses of work and took the helm for long periods, relieving the strain on Tony and Ynskje, especially over night.

We had to cross busy shipping lanes mid way.  It was a bit like dashing across a busy motorway: wait for the best gap in the traffic and go for it, except that in our case it took 1½ hours to cross and a lot of ships can appear in that time.  By dawn of Wednesday we were off Rotterdam and picking our way through dozens of ships at anchor waiting for orders or for space in the port – a vast parking lot.

By 7:15am we had reached Scheveningen, which is the port for Den Haag and where we will stay awhile.  We enjoyed a good breakfast and showers before making a start on catching up on sleep.  In the evening Dan took us out to a Greek restaurant, which was excellent, before we put in another ten hours or so of sleep, so we are feeling much more human now. 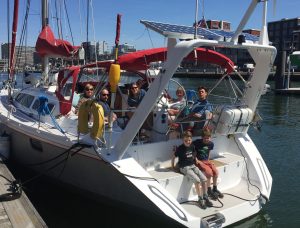 On Thursday Ynskje’s mum Trees and nephew Aram, his wife Jo and their twin sons Kasper and Jelle visited.  Trees took us all for a pannekoeken lunch and much tea, coffee and boterkoek were enjoyed by all.  The weather was perfect for sitting and chatting.

Aram will join us on the next leg to Texel and will rejoin the ship on Friday evening. 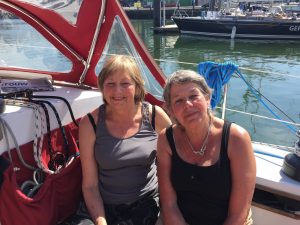 On Friday Heleen came to visit.  Heleen and Ynskje go back a long way and always have much to chat about.  Heleen has previously sailed with us to Wareham in 2011 and on the Veerse Mere in 2012.

We sail on Saturday morning for the island of Texel.

One thought on “Portsmouth and out to Scheveningen”