On Wednesday 12th we left Den Helder at 6:45am and had a very fast sail down to IJmuiden. The wind was west to south west force 5 and force 6 at times and we had one reef down to start and two later on. Once we had cleared the Schulpengat and were out in the Northsea we sped along and averaged 7.4knots over all, and were in by midday.

IJmuiden is the port at the western end of the Noordzeekanal connecting Amsterdam with the Northsea. Almost the whole coast is a broad sandy beach backed by sand dunes, often with holiday chalets on the beach, and just south of IJmuiden lies De Kennemer Duinen, a national park of sand dunes. However, IJmuiden itself is grim, to put it mildly – a vast area of docks and blocks of flats. Perhaps the least said the better. We moored in a half-empty marina that had been carved out of the beach. It was vast, and the cycles were useful just for getting along the pontoons. 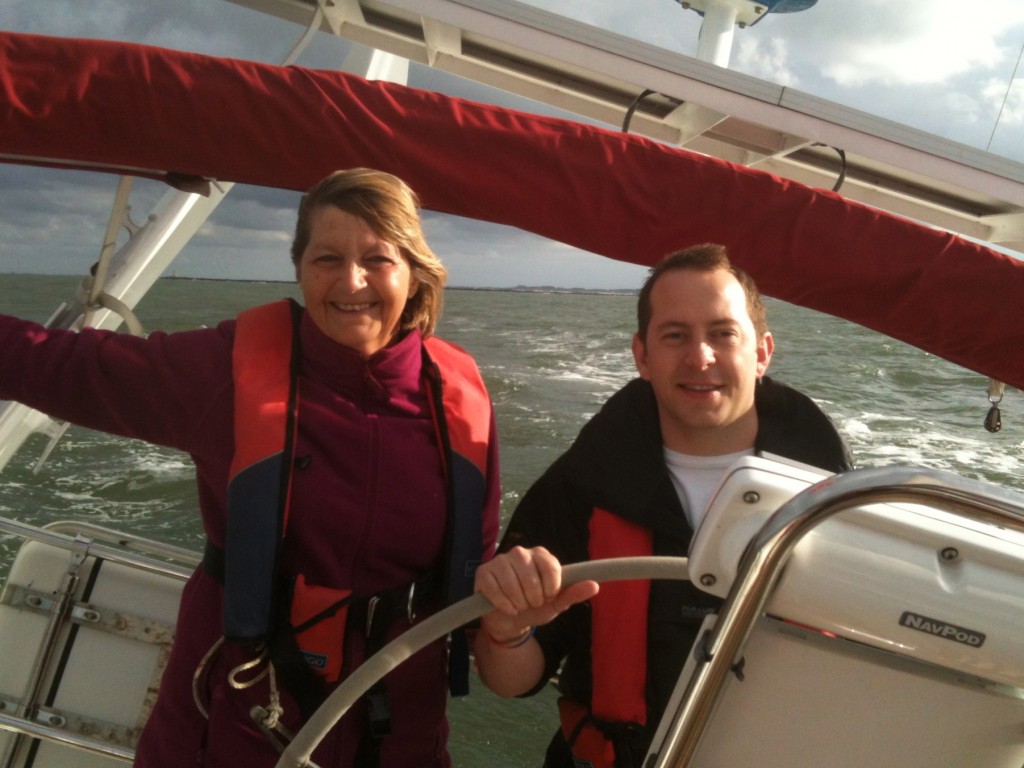 On the Friday we were joined by Ynskje’s son Nick, who had flown in to Amsterdam Schipol for a weekend visit. On the Saturday morning we set sail for the 26nm passage to Scheveningen. It was an ideal wind and we had another fast passage, averaging well over 6 knots. It was Nick’s first time on board, but he took to it well.

Scheveningen is also the port for Den Haag, the seat of the Netherlands government and royal family. We visited by tram ride and viewed some of the sites, including the parliament buildings, the royal palace and numerous embassies. There has just been a general election and Tuesday will be Prinsendag, when the royal family travel by coach to parliament for the Queen’s Speech and the opening of the new parliament. There was much preparation, including rehearsals by the cavalry. We also saw the Peace Palace and the World Peace Flame.

As well as being a port, Scheveningen is also a popular resort with a wide beach, parade and the fashionable kurhaus built in 1885. We walked the parade and took coffee and appelgebak on sofas in a beach establishment. For some reason the cavalry was exercising its horses on the beach and there was the curious spectacle of battle tanks sharing the beach with toddlers and their buckets and spades. On Monday evening Nick departed for his return to the UK.

On Tuesday we made passage from Scheveningen to Vlissingen – a distance of 65nm. We had been puzzling about how to make this passage in one day, given the tides, but in the end an early start while still dark, and a Force 6 all day did the trick. The last few hours was a long run into the Westershelde, battling against the springs ebb tide, with spectacular wind-over-tide waves. After thirteen hours at it, we are going to sleep like logs tonight. We will be here for a few days, until Tony’s son David arrives on Friday for the weekend.

PS We are still looking for extra crew for the passages back from Dunkerque and along the English coast from Dover. Let us know if you can join us! See the Cruise Plans for details.

One thought on “IJmuiden, Scheveningen & Den Haag and Vlissingen”