We have been preparing for our journey back to the boat for some weeks – it is too far to go back if something were forgotten!  We found that banana boxes make excellent storage containers – they come with lids and stack well.  We ended up with twenty five full of stores and spares etc.  Thank you Waitrose!  We collected the hire van on 15th April and loaded it almost full. 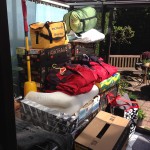 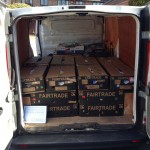 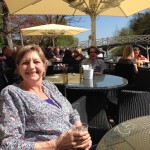 Break at the Trout Inn

The journey north is supposed to take only five hours but we paused for lunch at the Trout Inn, Oxford and then with the inevitable traffic around Birmingham and Wolverhampton it took eight hours.  It was with relief that we left the M6 and entered the Lake District once more – tranquile after the motorway madness.  We stayed again at Lancrigg near Grasmere – the vegetarian hotel that was once the home of Tony’s GGGrandfather.  Tony has been studying a memoir written by a daughter of the family which described their times visiting as children and we were able to help the owner Rob understand the changes to the building that were carried out when the family moved in.

The next day we continued to Maryport and returned to Antipole, which has withstood a series of severe gales and worse over winter.  The plastic winter cover, which was on its last winter anyway was almost completely shredded and the wheel and table cover has suffered some damage, but otherwise she has fared pretty well.

We have spent almost two weeks carrying out the various tasks to prepare for the season.  This year we needed to completely re-do the antifouling paint and it took a day and a half for two coats. This is a messy job, but note Tony’s head gear – a disposable shower cap was practical if not fetching. 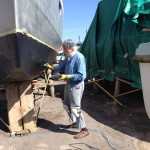 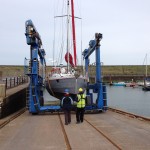 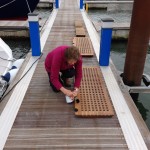 On Friday 25th we were launched and are now occupying a pontoon berth, which is very convenient while completing the preparations.  Ynskje has been doing excellent work treating all the woodwork.  The weather has been mixed, but we have been blessed with some lovely days for painting etc.

We plan to set off in a couple of days.  Our first passage will be to Kirkcudbright.  This is a chance for us to get used to Scottish pronunciation – in this case something like Kircoobry.

More news in due course.