On Monday we were joined by four of Tony’s grandchildren. 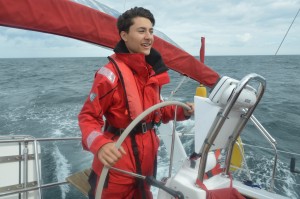 Lucas writes: The morning after the lengthy seven hour journey by train, from the South of England to Scotland, we rose with concerns over the light wind. Taking on water before setting off was necessary, with an increase in crew size. During this process, we were surrounded by seagulls tempted by the fishing boats aft, either gutting fish or preparing their vessels. Upon setting off in the calm, when the sea seemed a blue sheet, the spinnaker sail was raised. The wind soon materialised, and the sails were quickly changed to the genoa. Overall, it was a long sail totalling 10 hours as the wind was not in a supportive direction, causing us to tack. Although, the tacking commenced with little effort with the larger crew. All were relieved once Holy Island was in sight, and we anchored near the castle that stands proud on a large rock. 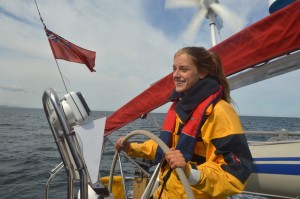 Maisie writes: The next morning we all had breakfast and got ready for a day out. We used the dinghy to get to the island but we had to go in two groups. When all the crew were on land we explored the castle for a while which was really good fun. Then we went over to the gardens behind the castle. There were lots of pretty flowers so everyone was taking pictures; we took a group photo too. It started pouring down so we found a nice place to eat and waited for the rain to die down. We then explored the town and went to a tea room there – it was so good! Around 8pm we started our journey to Amble. It was really nice watching the sunset. Seals were everywhere and a couple of them were following us; it was incredible watching them. It started getting darker and colder and a few of the crew were falling asleep but we all had a go at steering the boat at night. It was a great experience. After a long sail we got into Amble at about 1:30am, moored the boat and fell asleep within seconds. 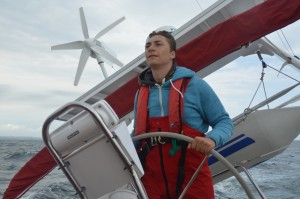 Kane writes: We had a day to rest in Amble after the night sail the evening before; this allowed us to have a lie-in on Thursday morning, which was good! After a late start we were able to get the bus to nearby Alnwick where we were able to see a large castle. We had lunch in a giant treehouse, claimed to be the largest in the world! After exploring Alnwick we went for a really nice afternoon tea and cake. The following day we were once again allowed to lie-in as we had a short passage to complete later in the day. We spent time in Amble itself in the morning, and left to head towards Blyth after 3pm. The passage on Friday was considerably bumpy, and very different to the beginning of the journey from Holy Island to Amble, where we could sit back and enjoy the seals swimming in the sunset in calm conditions. I’d enjoyed helming on the previous passages, and although I did on this passage, it was much more difficult with the stronger wind and larger waves! We arrived in Blyth just after 6pm, and the nature of the journey made it quite tiring, despite being the shortest of the passages. Fortunately though, we’d just managed to avoid the rain, which was a running theme during our sails. Ynskje still managed to cook a tasty curry once we’d settled down, which was very nice and much needed! It was now that we were beginning to realise that we were coming towards the end of our trip, with only one more passage to go. It has gone very quickly, but thoroughly enjoyable to be back on board! 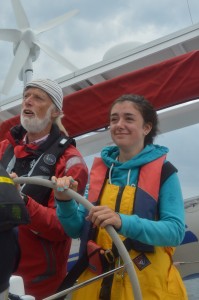 Molly writes: Our last sail was from Blythe to Hartlepool – our final destination. This was the overall favourite passage from all the crew members as the conditions were perfect for our sail down south. It was thoroughly enjoyable for everyone, as the wind was in the right direction and it was strong enough (mostly F6) to keep an average speed of 7.2 knots. We also managed to cut the journey from an estimated 6 hours to just over 4 and a half hours. Luckily, the journey wasn’t too bumpy and therefore many cups of tea and coffee were made along the way! We arrived around 2 o’clock which gave us time to enjoy some warming tomato soup followed by an explore around Hartlepool. In the evening we ate a lovely dinner made by Ynskje which concluded yet another incredible day on Antipole.
Ynskje writes: It has been great week having Kane, Molly, Lucas and Maisie sailing with us. Many of the jobs I usually do like preparing the boat before and tidying up after a passage were done swiftly by the crew, as well as the actual sailing. It is good to see how they have come on with their sailing skills over the years. It was a pleasure to have them onboard. 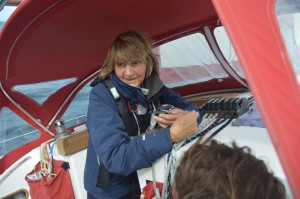 The skipper adds:  Ynskje has done a fantastic job of preparing the accommodation and stocking the fridge for all the extra hungry souls.  Relieved by the extra hands of some of her regular duties on deck, she did wonders in the galley with much appreciated meals.  Only on the passage from Amble, when we were beating into a F5 with steep seas, did the flow of hot drinks and goodies from the galley temporarily cease. 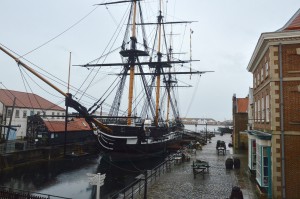 The crew are booked onto trains south for today Monday from Hartlepool and we really needed to get here before the severe weather arrived, which we achieved on Saturday.  This left time on Sunday to visit the maritime museum here, centred around the restored HMS Trincomalee, built in 1817 and the oldest naval ship still afloat.  It was interesting to explore the ship and have insight into life aboard almost two hundred years ago.  A historic quayside has been created around the dock, with shops and businesses as they are imagined to have been at the time.  It has all been done very well.  It was strange returning to Antipole afterwards. So much has changed – especially with modern materials. 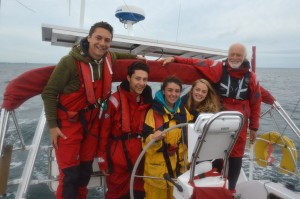 It has been a fantastic week having the crew aboard.  It has been rewarding to see how they have developed over the years – gradually doing more demaining passages.  They are all competent helmsmen at sea now, and I felt comfortable going below at times and leaving them alone at the wheel, even in demanding conditions.  It will seem strangely quiet aboard!

Here is the video we took during the passage:

3 thoughts on “Dunbar to Hartlepool with grandchildren crew!”