The grandchildren left Antipole at Hartlepool.  On Tuesday, Tony’s cousin Jon and his wife Shelly, who live nearby in Stockton, came to collect us so we could visit them.  Fortuitously, that evening they were meeting up with Jon’s sisters Judy and her husband Mike and Susan and her husband John.  We had a very enjoyable evening in The Fox and Hounds in Carthorpe. Tony and his sister Alison spent many happy childhood holidays with their Williams cousins and it was good to reconnect.   There was lots to talk about and many reminiscences. 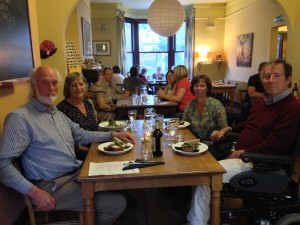 In The Waiting Room

The next day Jon and Shelly took us to some of their favourite spots in the area and in the evening we had supper in The Waiting Room – a very excellent vegetarian restaurant of some thirty years standing.  Then it was time to return us to Antipole in Hartlepool.

On Thursday we sailed from Hartlepool twenty five miles to Whitby.  The wind was much lighter than forecast and we had a slow and easy passage.  Whitby is an ancient port set deep in a valley.  The town has many picturesque streets and alleyways. Standing high on the hill overlooking the town are the ruins of Whitby Abbey and the later church.  The parishioners are certainly kept fit climbing the steep 199 steps to reach the church.  Thankfully seats have been provided at intervals so the weary may rest.

Tony had been puzzling for some while about how to achieve the next few passages as there is little shelter and most of the ports dry.  On Friday there was a strong northerly wind, which made for a bumpy early departure out of Whitby followed by a fast passage southwards just under genoa.  We found shelter under Flamborough Head off Bridlington, which made a short first day but gave a welcome rest in the afternoon.
Saturday brought a good westerly which made for a fast passage to Wells-next-the-Sea on the north Norfolk coast.  This really brought home to us the scale of the off-shore industry in this region – rigs in almost every direction.  We saw three wind farms under construction. We skirted close by the Westermost  site – the support posts are in place and the first turbines being mounted.  With a dozen craft in attendance the project must create a lot of employment.  The wind strengthened to F6 and we had all three reefs in on the main and partially rolled the genoa and still made 7 knots.  We arrived off Wells-next-the-Sea at low water and had to anchor to await the tide.  Unfortunately we rolled heavily, with the decks awash at times so it was uncomfortable.  Tony needed to make bread and Ynskje had to hold the bowls to stop them jumping over the fiddles. 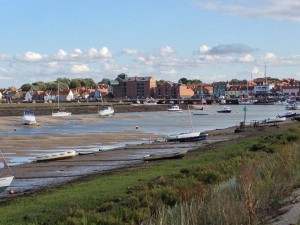 Wells-next-the-Sea with Antipole alongside the pannenkoekenship

Well-next-the-Sea has a very difficult entrance across sand banks with strong cross-currents and breaking surf on all sides.  It was dark by the time there was sufficient depth of water, even with our keel partially lifted, and we were very glad that the harbour launch came out to lead us in.  The picturesque town quay is a lively place busy with holiday makers.  We moored alongside a Dutch two-master which is a café and pannenkoekenship (Dutch pancake ship).  Crew who were with us in 2012 will remember eating on such a ship in Groningen.

More news in due course