We had a lovely time in Wells-Next-The-Sea, which is a delightful town with lots of interesting streets and shops.  We spent our final evening aboard the Dutch pancake ship The Albatros.  The skipper Ton has owned it for many years and traded with it as a sailing cargo ship all over the place from southern Europe to St Petersburg.  He still sails it to dry dock every two years.  It was good to see such a vessel still seaworthy and sailable.

By Tuesday the gales had blown themselves out and we set forth.  We left right at high tide but there was still quite a swell and so our exit over the bar was ‘interesting’ as we followed the twisting channel where the waves did not quite break.  Once clear we had a fast passage round the north east coast of Norfolk, passing a number of places familiar to Tony’s family: Sherringham, Bacton, Hemsby, Scratby and California.  We had planned to anchor overnight off Sea Palling, where there are now some artificial reefs giving shelter, but the sea was still running in from the north west and we were not confident of finding a safe and comfortable anchorage.  So we sailed on to Great Yarmouth, thus passing Hemsby after dark, so we could not see if the bungalows still stood as in the 1950s. We could see the bright lights of the “Horror Hole” at Winterton-on-Sea.  We eventually entered Great Yarmouth about 1:00am, which worked out well as it was slack water.

Sailing up Braydon Water with a Broads yacht

We had arranged for the Yarmouth Haven Bridge to be lifted for us the next day at 3:00pm and we passed through this and thence through the Breydon Bridge and up the River Yar across Breydon Water to the southern Norfolk Broads.  Our Dutch readers would find much familiar in this area: a region of fenland drained, once by windmills,  into rivers created with raised dykes, such that the pasture so created is often below sea level.  There are also many broads – shallow lakes which were once areas of old peat workings now flooded and often connected to the rivers by dykes.  The area developed its own style of working boats (such as wherries) and later recreational yachts all suited to the shallow water and narrow rivers and with masts that can be lowered for bridges. Today it is a national park and a popular boating area.  Tony’s children will remember several holidays on these waters.  Antipole’s shallow draft is ideal for these waters, but we are very restricted by our fixed mast as to where we can go.  Sadly, one recently created fixed bridge prevents us from going through to Lowestoft – a situation that would never be tolerated in the Netherlands. 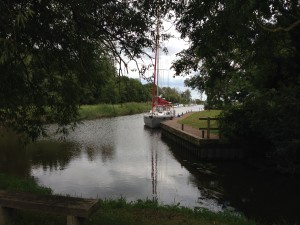 We managed to sail all the way up the Yar, past the Berney Arms, through Reedham railway swing bridge and hence to Langley Dyke.  [For our Dutch readers: in English use, a dyke can refer not only to an embankment (as in Dutch) but also to a narrow waterway so created.]  Many villages or hamlets hereabout not directly on the river have a dyke giving access by water to a village staith (quay).  Langley once had an abbey but now has just half a dozen houses so it was a very quiet spot to hang out for a couple of days.  We had a good walk around the surrounding area, seeing several interesting old buildings, including a very ancient farmhouse.

The dyke to Surlingham Broad

From Langley we had a head wind sailing further up the Yar.  Tony was keen to try beating up the river against the wind, as he had often done years ago and he was curious if it could be done in Antipole.  On the broad River Yar it was possible when there was a long and short tack, but not practicable with both tacks short.  Crossing the large genoa took too long to gain steerage reliably for the next tack and it was very very hard work for the genoa hand!  It is understandable why Broads sailing craft have small jibs, often self-tacking.  We eventually reached Surlingham Broad, which we entered down a long narrow dyke and where we anchored for the day and night.

One thought on “Wells-Next-The-Sea and The Norfolk Broads”