Ynskje’s son Dan planned to join us for the last week in August and we had plans to welcome him aboard in his home town of Portsmouth and then cross to the Channel Islands and pay him off in Jersey or St. Malo.  Things did not work out quite like that…

On our way to Portsmouth we planned to join a Portsmouth Sailing Club rally at Island Harbour in the River Medina above Cowes but the weather has been playing hard.  On 13th August we went aboad at Wareham and in the calm evening motored down to Brownsea Roads, just inside the harbour entrance.  The next day, Friday, we had a fast sail reefed down in a westerly to Newtown Creek in the Solent where we anchored over night before completing our passage to Island Harbour on the Saturday morning.  It was the last day of Cowes Week and Cowes was a mass of boats all jostling for race starts off the Royal Yacht Squadron castle.  Somehow we managed to sail our way through the melée on our genoa in a light air and then ghosted all the way up the Medina to Island Harbour.  We enjoyed seeing friends old and new at the rally and then on the Sunday evening had a gentle sail with spinnaker to Portsmouth.
We left Antipole in the Camber on the club pontoon for a few days while we flew to the Netherlands for Ton’s funeral.
At the beginning of the season, we had found the anemometer at the head of the mast had disappeared and Tony had gone up to fit replacement. Then in July we found the wind vane was missing too.  We had obtained a replacement and during the PSC rally Tony had been hauled up again to fit this. 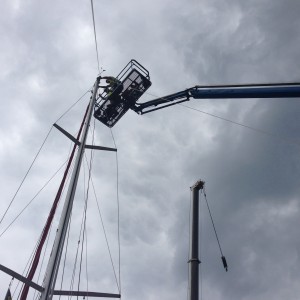 But it did not work well and was very reluctant to face into wind.  Garmin decided the whole instrument needed replacing.  Another trip up the mast determined that there was no way the old instrument was going to be unscrewed without major surgery.  Now it happens that the PSC pontoon is just in front of the new Ben Ainslie Racing building, which is still being finished.  The contractors kindly agreed to take Tony to the top in a cherry-picker platform, from where he was able to drill out the screw heads and drill new holes for a replacement fitting.  He could never have done this hanging below in the bosun’s chair. When the new instrument arrived it was relatively easy to install in another trip up (hauled by Ynskje again).  But, quite extraordinarily, the new instrument had port and starboard confused and needed to be replaced again!
Dan joined us as planned on the Saturday night but the weather was not conducive for a crossing to the Channel Islands and we decided to lurk in the Solent during the up-coming blows and rain. 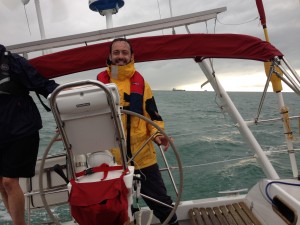 On the Sunday we had a good sail, mostly beating, to Newtown Creek, where we took a buoy and clung to it for two days of wind and rain.  From there it was a short sail on Tuesday to Lymington where we could explore ashore and again shelter from wind and rain. After the wind started to ease on Wednesday afternoon we beat against it to Hurst Castle and tucked into Keyhaven, picking up a vacant buoy to cling to as it was blowing F6.  On Thursday morning it was still blowing F6, so we set the storm staysail, reefed down and headed west.  It was a long beat but an excellent sail and Antipole handled easily with the staysail. We finally reached Studland Bay where we found good shelter and rest. 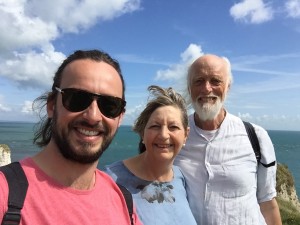 Friday was a fair day, albeit still with a SW wind.  We pumped up the dinghy and went ashore to enjoy a lovely walk out to Handfast Point and Old Harry and with views over the Isle of Wight to the east and the Purbeck Hills to the west.  A pub lunch rounded the walk off nicely.
That night we set sail at 10:00pm and had an excellent sail round St. Albans Head.  It was a full moon, albeit overcast.  We sailed into Worbarrow Bay, which is not normally accessible as it is within the Lulworth military firing range, but this was closed for August.  We tucked in behind Mupe Rocks. 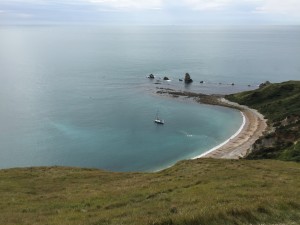 The following morning was sunny and we all swam before breakfast.  We then dinghied ashore and walked up the steep hills overlooking the bay. From Mupe Cove we had a gentle sail to Weymouth with the spinnaker set as a jenniker.  Conditions were so good we were able to set the cockpit table for lunch under way.

Dan writes: It has been many years of missed invitations before I joined Antipole and her intrepid crew on its adventures. Finally we locked in a date and, despite not being the planned route over to the Channel Islands, it was a fantastic trip down the coast from Portsmouth. Having lived away from England for almost ten years now, to hunker down in Newtown, take in the dramatic windy sunset sky at Keyhaven, tie up at yachtie Lymington and cut across the stilled firing range at night rekindled memories of early days on the water and I felt very much at home sailing off the coast of England. A huge thanks to Tony for planning, skippering and patiently teaching a land-locked individual how to get about on the seas. And of course massive love and thanks to Mum for the endlessly stuffed fridge, magical meals from nowhere and an invaluable time spent together on you and Tony’s cosy, floating home. 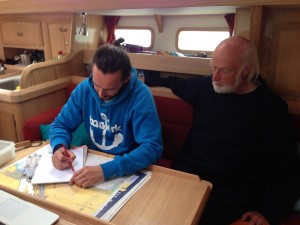 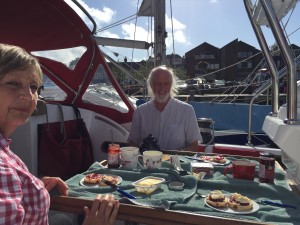 Dan was much missed after he left us in Weymouth – we realised just how much of the work he had been doing! Nevertheless, we had a good sail on Sunday evening back to Worbarrow Bay. This time the wind was from the north east and we were able to anchor under Worbarrow Tout. We hung out there for two nights, enjoying a great walk up the hill to the ancient site of Flowers Barrow and the view back over our anchorage. The sunset was magnificent, with a spectacular rainbow over the reddish rocks. 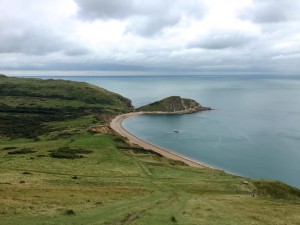 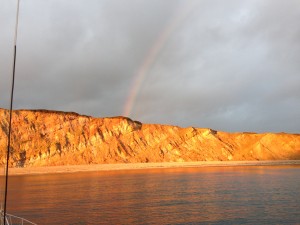 Tuesday after the Bank Holiday Monday was the end of the summer ceasefire on the Lulworth Ranges and the wonderful peace would be shattered at 09:30, so we bade Worbarrow Bay an early farewell and had a good sail back round to Poole and up to our mooring on the River Frome.  The second replacement wind instrument was waiting for us at the boat yard and, once again, Ynskje hauled Tony to the top of the mast to switch the instruments over.  The new one is now working as it should and we hope that is an end to climbing exploits for a good while.

The weather was great and we stayed a couple of nights on our mooring and did a walk ashore around the river dyke.  The reeds have grown a lot since we first planned this and for much of it we were pushing through head-height reeds,  We saw lots of wild life – including several deer who hide out in the reeds.

We are now, Thursday, back home and sorting out the washing and catching up on post etc.

We will be meeting up with Ovni friends at the Southampton Boat Show next week.

love to all, Ynskje & Tony

One thought on “Solent Sailing with Dan aboard”