Antipole on the pier head at Round Island

We have just had a family gathering during a week on Round Island in Poole Harbour.

We had rented the three guest cottages clustered around the pier and there was ample accommodation for Tony’s extended family, including nine grandchildren.

Antipole was accommodated on the pier head, which was very convenient, and some of the younger children enjoyed sleeping on board.

We shared some lovely times and the island and its beaches were much enjoyed. 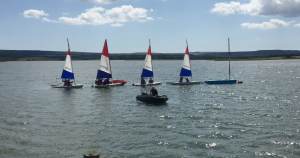 Rockley Water Sports laid on a day’s dinghy sailing tuition for the youngsters and left behind various dinghies for use in the subsequent days.

Unfortunately, it blew hard for several of these and the dinghies were not used as much as they would have been in fairer weather.

It was an idyllic setting with many memories to treasure.