On 8th October Antipole was lifted out for the winter and we commenced laying up and removing gear for inspection and cleaning. 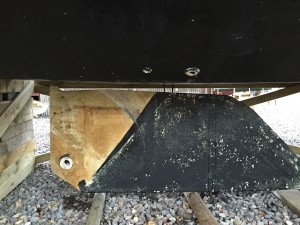 We have now completed five seasons and it is time to remove the lifting centre plate for inspection and service of its bearings and lifting tackle.  So this time Antipole was blocked off extra high so we could get access underneath.  After exploring how to achieve it, the plate was lowered to the ground and manoeuvred out.  Being aluminium, it is not as heavy as many plates, but still takes four men to lift it.

Close inspection of the under-the-water paintwork revealed that the antifouling was in need of major work and the undercoating was coming off in places.

Our long term plan has been to adopt CopperCoat in place of traditional antifouling.  This system has fine copper dust dispersed in an epoxy resin and should last ten or more years, rather than one.  Tony’s previous boat Santana had it and it worked very well.  But using it on an aluminium hull is controversial and causes much drawing in of breath through teeth.  The manufacturers swear it is OK.  We treated the rudder blade last year and it seems fine.  Tony reckons the alleged problems are the marine equivalent of urban myth without evidence.

iven the undercoating needed repair and we have the plate out and the boat blocked off high, we made the decision to go ahead with CopperCoat this time.

So the company Symblast was engaged to remove all the remaining antifouling and strip back the undercoat to bare metal.  They set up a tent around the hull and blasted the paint off using a fine grit in compressed air.  What would have taken us weeks of hard graft was achieved in one morning! 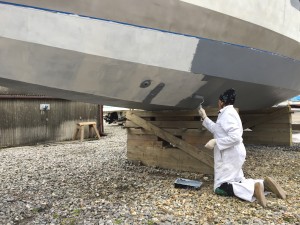 We then started the process of building up a sound primer and undercoat of epoxy resin paint, which needs to last many years.  The first coat needed to go on the same day as the blasting — while the aluminium was still freshly clean.  We applied the five prescribed coats over successive days, alternating between white and grey colours so we could ensure good coverage.  We also worked up inside the centre plate box and inside the rudder mechanism, where the lifting rudder blade normally resides.  The epoxy paint then had to harden off for a week and to allow all the solvent to come out. 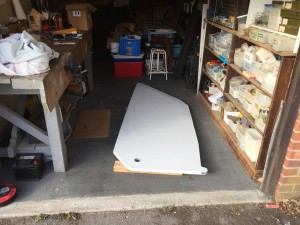 It seems too late in the season to start applying the CopperCoat, which requires particular conditions. So we have postponed that until the Spring.  The centre plate was loaded into the back of the car, from where it stuck out some way, and has been transported home to the garage workshop where it can be CopperCoated at leisure.

We returned to the boat at the beginning of November for final cleaning, draining off of all water, removal of canvas and covering up for the winter.

Now we are back home and can start working on the removed gear, catching up with family and friends, and planning next season’s voyaging.

That’s it from us for this year – see you next!