During our last few days in Stockholm, another Ovni yacht turned up. We got to know the owners Stuart and Sue, who are from New Zealand but cruising European waters. We spent two evenings on each others’ boats learning about them.

We left Stockholm sailing via the narrow gorge around the island of Boo – one of two short cut ‘backdoors’ in and out of Stockholm. On our second night out we stopped in the Napoleon anchorage – so named because the emperor’s brother’s grandson once bathed there. We found Stuart and Sue anchored there and spent another enjoyable evening aboard Encore. From Napoleon we had a great sail over two days though the very beautiful archipelago to Nynäshamn. Most of it was against the wind, so there was much tacking in the narrow channels. 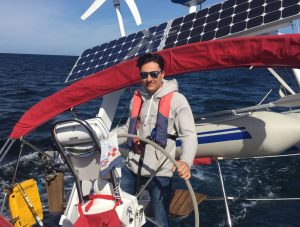 In Nynäshamn we were joined by Tony’s grandson Lucas, who sailed with us all the way to Kalmar.  We had planned to sail out to the large island of Gotland but the wind gods were not co-operating and we decided instead to work our way mostly against southerly winds down the so-called ‘Blue Coast’ – with its thousands of islands and skerries. It has been great to have an extra hand on-board and Lucas has certainly earned his passage with long spells at the helm and much grinding away on the winches when tacking.  The many tasks tucking up after a passage or preparing to sail seem to happen magically quickly too!

On our first night out, we stopped on the tiny island of Hävringe, which is little more than a collection of rocks with a light house in the middle of nowhere. There is a very small dock and we squeezed in through the narrow entrance not much wider than Antipole.

From Hävringe we had a good passage to an anchorage on the island of Harstena. We walked through the forest to the pretty habitation to buy bread and enjoy a meal. Harstena is noted for its rare red water lilies. 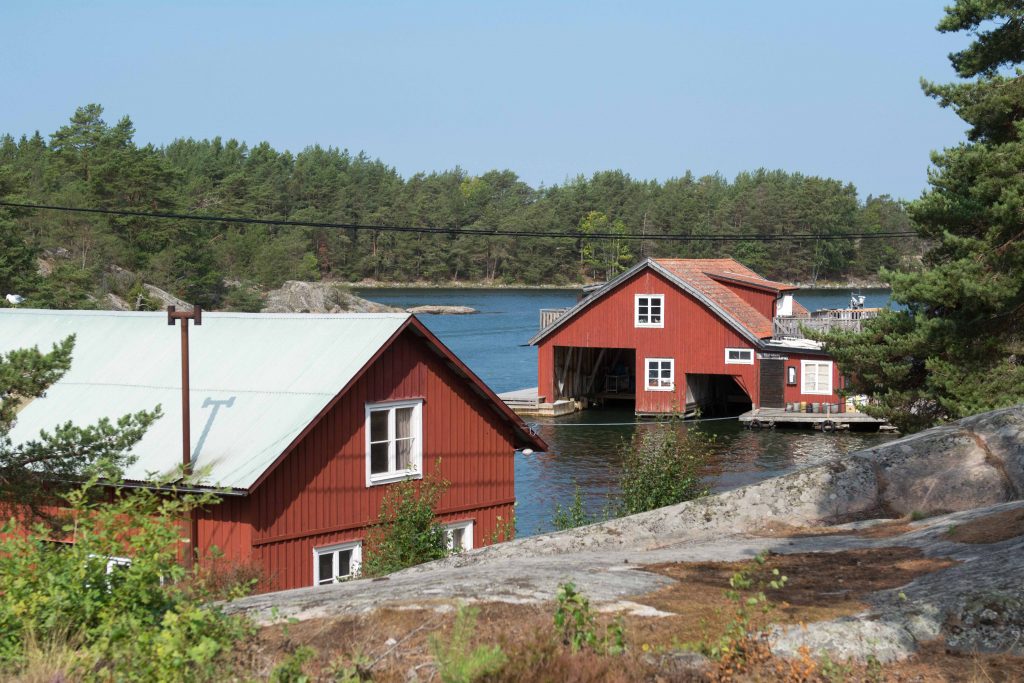 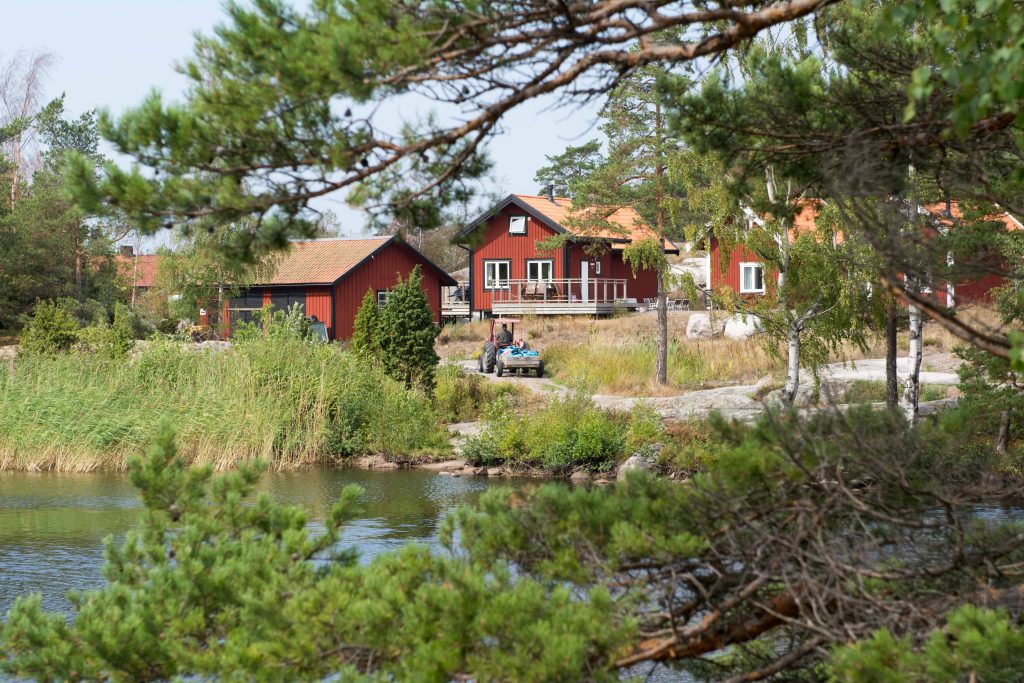 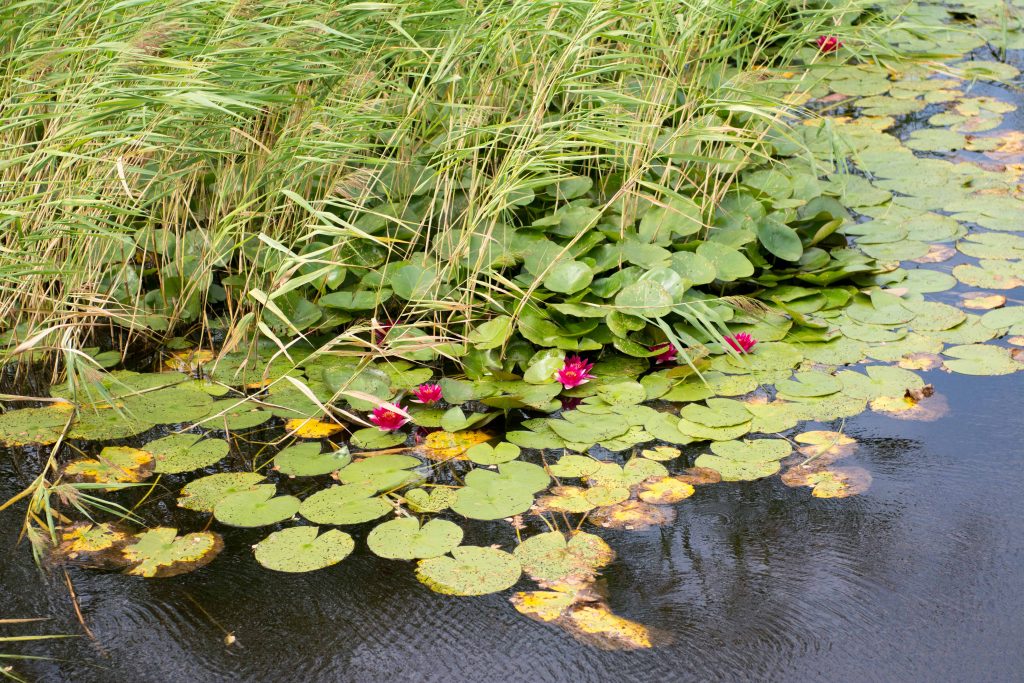 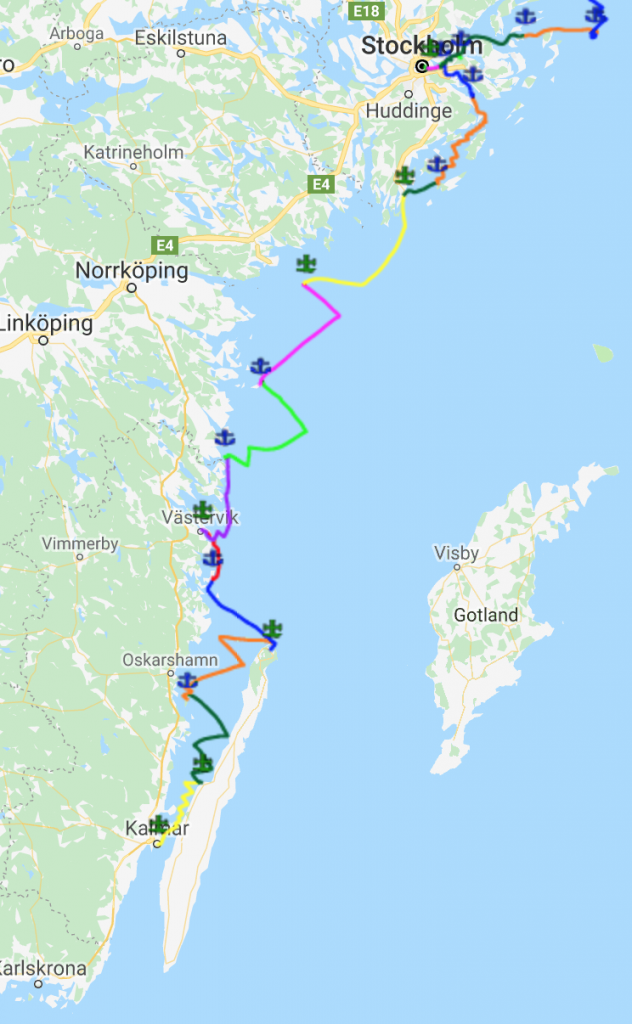 After another night at anchor we put in to the town of Västervick, where we restocked, took on water and enjoyed hot showers. From Västervick we picked our way south through the skärgärd – the maze of islands and skerries – and, after a further night at anchor, crossed 15nm to the northern tip of Öland.

Öland is a long thin island (about 75 x 6nm) lying off and parallel to the mainland. Unlike most of Sweden it is of limestone and the landscape is quite different – more New Forest than rocks and boulders. We berthed at Nabbelund, which lies in a large lagoon with a narrow entrance. We explored the surrounding area on cycles, including the “troll forest” nature reserve.

For our passages southwards from here, the winds have again been persistently against us. We have had no option but to spend days tacking down the Kalmarsund – the long sound between Öland and the mainland. Some days the wind was F6. For only the fourth time in Antipole’s life, we rigged the storm staysail — a small foresail replacing the large genoa, which becomes very cumbersome under these conditions. We have not used the staysail much because it is a pain to rig. However, once set up, the boat is much more manageable in strong winds. 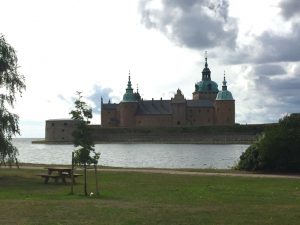 Finally, we reached the ancient city of Kalmar.  Kalmar dates from around 1255 and was one of the most important cities in Scandinavia.  In 1397 the Kalmar Union treaty brought together Norway, Denmark and Sweden (then including what is now Finland) in a kind of Nordic European Union centred on Kalmar.  This lasted until 1523 when it broke down following feuding between Denmark and Sweden.  In the centuries following there were persistent bloody wars between Denmark and Sweden, each demonising the other.   Kalmar, then close to the Danish border, was strategically very significant and the castle was greatly developed.  We enjoyed an extensive visit as well as exploring the pleasant and lively town.

The Linnaeus University is being consolidated in Kalmar with new buildings in the docks area and soon 10% of the population will be students, which will make it even more vibrant.

In Kalmar we said goodbye to Lucas, who must return to life ashore.  Lucas writes:

A really enjoyable time aboard Antipole, fitting in many passages despite the unfavourable wind direction. It was great to see Sweden from different perspectives, from peaceful nights at anchor to the parades of vintage American cars through Kalmar in the evenings. Thank you for the lovely time Grandpa and Ynskje.

Ynskje & Tony visited a gallery and also the County Museum, where we much enjoyed an exhibition about artist Jenny Nyström (1854 – 1946).   She was a very talented painter and illustrator, best known for developing the nissa or tomte of Scandinavian folklore. The tomte, accompanied by a goat or pig, is an elf-like character with a red hat,  who needs to be fed porridge to keep him happy, so he will bring presents on Christmas Eve.  She developed him into a Santa Claus figure which has became very popular and part of every Swedish childhood.

We have arranged to lay up Antipole over winter in Karlskrona, a few days sailing from here.  More news from there.

2 thoughts on “Stockholm to Kalmar down the ‘Blue Coast’”