While we were negotiating with Northsea Maritime over the proposed purchase of Antipole, we agreed to make her available for the Southampton Boat Show in September.

So this Sunday/Monday [11/12 September] we were planning to sail from Wareham up to the Solent and then deliver her to the show marina. In sailing the weather determines all, and it turned out that this would not be a comfortable time to be out. So we seized moderate winds on Friday to make a rather earlier but very pleasant passage from Wareham to Newtown Creek. The wind was mainly southerly and so not against us for once, and we had a delightful passage, despite a fog bank which rolled over us for a time.

Newtown Creek seems almost deserted – perhaps it’s just late in the season or maybe on account of the impending weather. So we took the western branch and found ourselves the only boat in the anchorage in Shalfleet Lake. It is really beautiful, and also has better shelter from westerlies than Clarmerkin Lake in the eastern branch. On the Saturday morning as the wind started to build we dragged our anchor in the soft mud, so had to make ourselves more secure. As I write this on Saturday evening, we have 40 metres of chain laid out in the mud. We were visited by someone from another aluminium boat in his dinghy and took the opportunity to ask him to take our kedge anchor out. So we have two anchors set in a Y-configuration. It now seems that on Monday the remnants of Hurricane Katia will blast the British Isles, so we are very glad to be already in the Solent and not needing to make passage from Poole.

Monday 12th September:
With the prospect of actual gales over night and the possibility of having to turn out of our bunk at 3am if we dragged our anchors, we played safe and moved onto a mooring buoy. Thus we could sleep soundly and longer.

We will have been here for four days, which sounds a long time, but it is amazing how the time passes: up for a late breakfast; followed by elevenses with toast and marmalade; the odd job on the boat or reading; lunch followed by an after-lunch nap after which tea and cake are called for; then time for some bird watching on the surrounding mud flats (we have become familiar with the Bar-tailed Godwit) and it is soon time for pre-supper drinks and nibbles; then supper before reading or watching a video and it is soon time to turn in. You get the gist?

On Tuesday morning it was time to move, and move we did, briefly topping 9 knots through the water on a broad reach up Southampton Water. As the wind built up again it was two reefs in.

Stephen had arranged for us to go into Hythe Village Marina on the western shore where we could prepare the boat for the show. Alongside water and electricity made this task easier, and Antipole was soon gleaming. Stephen was there with another Ovni – a larger 445 and we joined him and Ray for supper.

On Wednesday morning we passed out through the lock together for the short trip across Southampton Water to the boat show marina. This marina is rigged just for the show and, unlike regular marinas, packs a lot of boats in a small space, and boats have to enter in a planned order. It was quite tricky but there were lots of helpers and a tender to guide us and nudge our bow around.  Soon we were doing a final clean up and packing away personal bits and pieces. Antipole suddenly feels rather bare! Here she is alongside the larger 445 on her left: 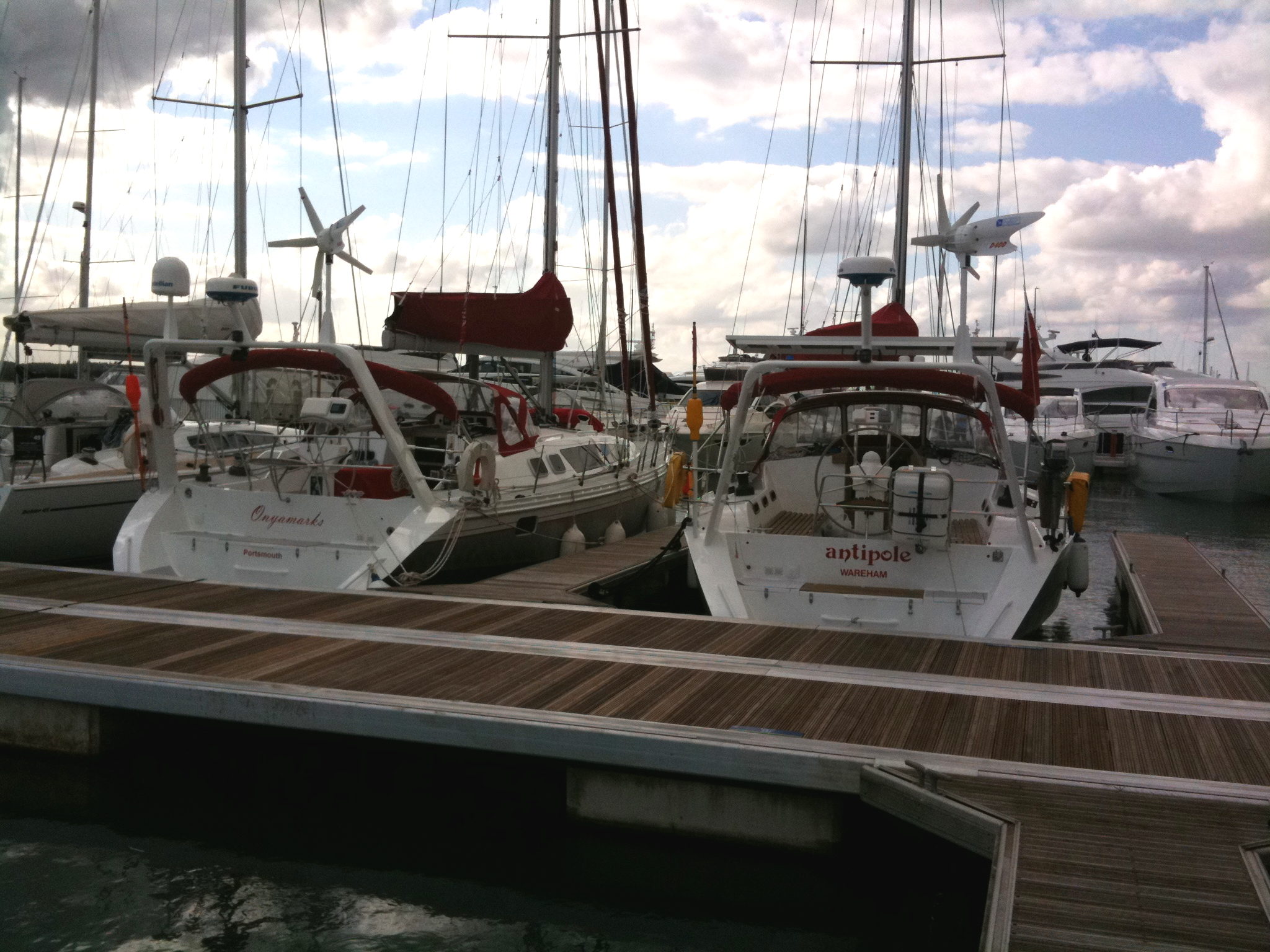 As I write this Ynskje has taken the train to Wareham to pick up our car. We will be heading home for now. We will be visiting the boat show on several days next week as we have a lot to research and follow up, and on Tuesday we take a turn manning Antipole and talking to visitors.

That’s it for now.

love to all
Tony & Ynskje
x

2 thoughts on “Heading for the boat show”