We had a very busy and productive time at the boat show, spending five days there.

On the Tuesday we did duty on Antipole while various visitors came aboard.  Some were just curious, but others were in the process of deciding about a purchase.  It took us visits over two years to come to our decision, so it was interesting to host others in that process.

On the other days we worked through a long list of matters to research or items to purchase at the numerous stands.  We had deferred certain items until we had some experience with the boat and now was the time to take advantage of the significant deals to be had at ‘show prices’.  We have ordered a cruising ‘chute for down wind sailing — this is a cross between a spinnaker and a genoa, and hopefully easier to manage with just two of us than a full spinnaker.  We have ordered a variable pitch propeller to replace the standard one which drags like a bucket — this should give us an increase in speed, especially in light airs, possibly by as much as 20%, as well as better fuel efficiency and improvements in maneuverability. It was very convenient having the boat at the show, as we could pop back to measure up or check other details as required, and store purchases.  It was reassuring to be told to take our shoes off before boarding our own boat by the person on duty!

The show ended last Sunday, and we returned on the Monday to collect the boat.  It took us some hours to reclaim it by putting back into place some of the personal effects that had been hidden away and to make Antipole ready to sail.  We had been asked to give a test sail to someone who was minded to buy a 395 but wanted to try one first.  It was an excellent wind and we had a glorious sail all the way down Southampton Water and east to Portsmouth, with Paul helming most of the way. 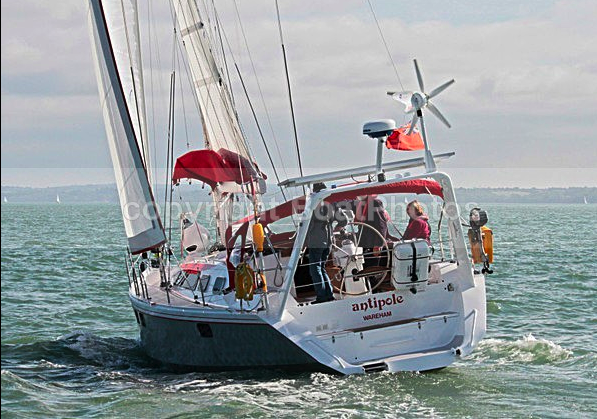 Back in Portsmouth we reversed onto the Portsmouth Sailing Club’s pontoon in Dead Fish Alley, where we have remained since, while we tackle phase three of the fitting out, most significant of which is installation of a heating system for colder weather.  The heater burns diesel fuel, which has to be piped from the tank up forward to the burner at the stern.  An exhaust vent had to be drilled through the hull and, hardest of all, I am installing ducting to carry the warm air to each area.  Getting 5″ ducting the length of the boat has been a major operation, as it has to be routed out of sight behind various lockers etc.  Getting it past the heads and navigator’s area was a serious challenge and necessitated removing a lot of fittings and gear. The boat is in complete chaos and we can hardly move around for floorboards, and displaced equipment.  It is just as well we are not sleeping on board but staying at the house overnight.

More news when the boat is back in order!

One thought on “The Boat Show(ed)”